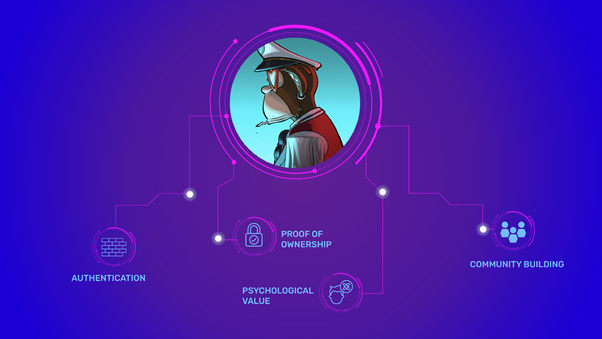 In an attempt to define NFTs briefly, one could describe how most cryptocurrency tokens are fungible (exchangeable with another token identical to it) while NFTs are the opposite (one-of-a-kind tokens). Since so much more can actually go into an NFT, they can be quite difficult to describe in a succinct manner. You may have heard definitions like “it’s digital art stored on the blockchain”, or the disapproving generalization that NFTs are merely “overpriced JPEGs”. While such statements are polarising and debatable, this is not the full picture of what NFTs have to offer.

So what is the true value of an NFT?

Because NFTs are stored on the blockchain, their existence is permanently registered on a trusted network. Every transaction involving the transfer of an NFT from wallet to wallet since its creation is also permanently recorded. This provides an innovative, solid record of authentication.

How is this useful in reality? Consider what recently happened to YouTuber, NFT and Pokémon card collector Logan Paul. He paid $3.5 million on what he thought was a “sealed & authenticated box of 1st Edition Pokémon cards”, only to find that was not the case. Interestingly, the box had been validated as authentic by the Baseball Card Exchange. Bolillo Lajan San, the well-known and respected card collector who sold him the box also believed it was legitimate, which raises some questions – how many people owned this box, and did they all know what they were buying was not genuine?

When it comes to digital collectibles, these questions are just as relevant. The main difference is that it’s much easier to examine the background of an NFT than it is with a physical item. Logan Paul, as a collector of NFTs himself knows this, making this statement on his podcast –

“The use case for NFTs became so much more exemplary and obvious after I got scammed out of a fake Pokémon box – a physical product was not what I bought. That will not happen with non-fungible tokens.”

Some NFTs are part of vast collections of similar artworks with varying computer-generated characteristics. A prime example of this is BAYC (Bored Apes Yacht Club). Each NFT seems to be a portrait of a cartoon ape, but these NFTs also provide their holders with access into an exclusive community with members-only features. Since projects like this have been recently becoming massively popular, the corresponding NFTs have adopted the role of Twitter profile pictures. By having a BAYC or CryptoPunk as their display picture, the owner identifies themselves as a player in the NFT space and part of a relevant digital community.

Imagine how much these communities would appreciate a profile image that combined aspects of multiple projects like BAYC, Monster Rehab, Alien Boy, etc. that was a collectible NFT in itself? This is the concept behind NFT Avatar Maker, the “be-all and end-all avatar tool”. With over billions of combinations and thousands of traits to choose from, this is the only avatar tool where users can mix traits from their favorite NFT projects and combine them to make their own custom avatars. Once an avatar is created, that exact combination of traits can never be used again, creating an element of rarity that often brings value to NFTs.

The world has barely seen the full potential of NFTs. Look at how masses of people have already rallied together for collectible images of apes with community perks, and ask yourself – how much bigger can this get? Because it can get much bigger. For instance, if people can buy digital land as NFTs, and physical high-rise apartments using crypto, then how long until we start using NFTs to prove physical home ownership? Authentication, combined with the power of collective community can create an incredible future for NFTs. Right now, it looks like those who can see just a glimpse of that future can potentially create massive opportunities for themselves and those around them.