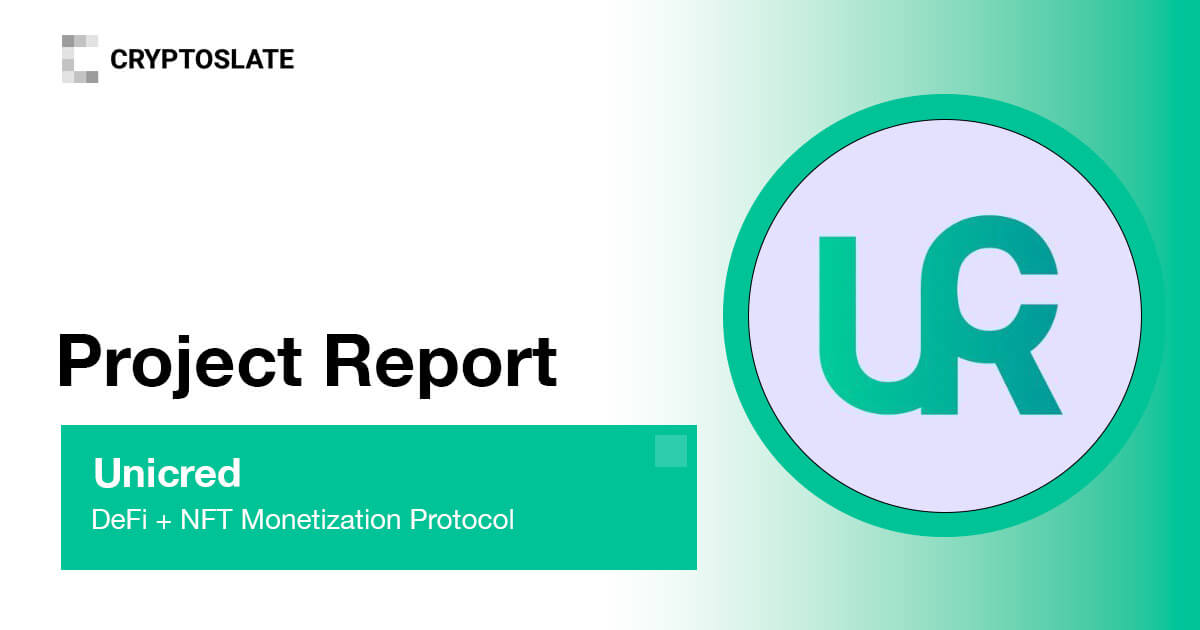 Launchpool Labs incubator in partnership with CryptoSlate is excited to bring you the Project Report series – an in-depth overview of projects that are at the forefront of the industry, by expressing an unbiased evaluation of the technology used, product maturity, team information, SDKs and code, an assessment of the risks and opportunities around investment in the project, and much more. Today, we’re introducing the Unicred Project Report.

About Unicred: Unicred is an NFT monetisation protocol and a money market protocol powered by data science, founded by a senior team with backgrounds at Goldman Sachs and Wells Fargo. As a DeFi instrument, it enables user-centric borrowing & lending against crypto to earn higher yields, by making the interest rate and LTV calculation dynamic. Top NFTs are used in collateralized borrowing against it, with NFTs remaining in the custody of the user.

Launchpool Labs is a chain agnostic community-centric incubator, powered by Launchpool. Projects and Teams are incubated via a bespoke model that serves co-building the MVP and MVC (minimum viable community), as well as raising pre-seed / seed. Launchpool Labs has a variety of protocol partners, advisors, marketing & launch professionals.

After incubation, projects can run a pre-IDO on Launchpool’s launchpad, where everyone receives guaranteed allocations in private rounds (subject to KYC).  Roxana Nasoi, MD at Launchpool Labs:

“We love the NFT monetisation protocol that Unicred is building, as well as their DeFi instruments that are backed by real user data – something that was lacking in the current crypto ecosystem. We hope the CryptoSlate community will enjoy this Project Report, and support the Unicred team, as much as we enjoyed working with Rakesh and his team during their incubation at Launchpool Labs.”

Disclaimers: Unicred is part of the 1st cohort of projects incubated at Launchpool Labs (August 2021 – November 2021). CryptoSlate is a valued media partner of Launchpool Labs.

Unicred is a multi-blockchain collateralized borrowing and lending platform. The protocol calculates interest rates and LTVs using statistical models based on on-chain user wallet data, enabling it to address the gaps found in the current lending ecosystem.

The data-based approach fuels the protocol’s risk algorithm and makes interest rate and LTV calculation dynamic, looking at all possible indicators available on the blockchain.

In this report, we analyze the technology behind Unicred and the solution it offers to the problems facing the ever-growing DeFi ecosystem.

Lending and borrowing have been the central features of the traditional financial system for hundreds of years. However, it wasn’t until the introduction of decentralized finance that these features began to evolve and grow, both in terms of their accessibility and their use cases.

As of December 2021, there has been over $98 billion of total value locked (TVL) in DeFi protocols, showing that the market has quickly accepted the novel concept. The top five largest DeFi lending protocols alone account for over $53 billion of TVL. The volume of transactions is also coming from only approximately 50,000 wallets, meaning true DeFi adoption has not yet taken place.

While this is still a fraction of the value of the global financial services market, which is expected to reach $22.5 trillion by the end of 2021, it shows that there is still unlocked potential left in DeFi.

However, decentralized finance doesn’t come without its own set of drawbacks. To issue permissionless loans, lending protocols require collateral in the form of cryptocurrencies. And while the lack of a third party certainly lowers the barrier for many of the unbanked, it still presents a roadblock to those that don’t hold any crypto assets.

Unicred aims to position itself as a solution to this very problem, with its data-driven algorithm enabling users to access uncollateralized loans.

Unicred’s lending and borrowing functionality is based on a three-step workflow. The platform first fetches repayment data from Compound and Aave contracts and then builds out an experimental scorecard based on the relative variables. After that, it evaluates their correlation to wallets outside of Compound and Aave to ascertain risks.

When it comes to particular types of loans, Unicred’s NFT-collateralized loans will be the central focus of the platform. To issue a loan to a user who put in an NFT as collateral, Unicred first fetches the information about the token from various data sources. These include the blockchain the NFT was issued on, the pricing oracle integrated with the platform, and various NFT marketplaces such as OpenSea and Rarity.tools.

The platform fetches two types of data—static and variable. Static data includes information such as the rarity of the token, the history of the NFT’s ownership transfers, and publisher verification. The floor price for the NFT, the current price of ETH or the native token of another blockchain, and its transaction volume make up the variable data.

Unicred then uses the data to evaluate the NFT and determine the interest rate and LTV for the specific user. If the user accepts, the NFT is then deposited into Unicred’s NFT contract and the platform lends the user the determined amount of DAI.

The borrowed DAI is supplied by liquidity providers, who deposit the stablecoin into a single asset pool on Unicred. To ensure enough liquidity and incentivize more liquidity provisions, Unicred offers LPs 50% of the platform’s profits.

Unicred’s native token UCR has a fixed supply of 100 million. A total of 5 million tokens, or 5% of the supply, has been sold to investors in the Pre Seed funding round, while another 5 million was allocated to the Seed round. In both funding rounds, the tokens are subject to a vesting schedule where 10% of the supply will be released during the token generation event (TGE) and the rest vested over 10 months. The platform’s private funding round also received an allocation of 5 million tokens and is subject to the same vesting schedule.

The strategic funding round received the largest allocation—10 million tokens, or 10% of the supply.

UCR’s public sale will receive an allocation of 500,000 tokens (0.50% of the supply), with the entirety of the supply available upon listing.

To fund its operations, Unicred allocated 15 million tokens, or 10% of the supply, and subjected it to the same 10 month vesting schedule as its funding rounds. The Unicred team and its advisors received 15% of the supply, with the 15 million tokens locked up for a minimum of 6 months or until the product goes to mainnet. The supply is then released at a 10% monthly pace.

Another 10% of the supply is allocated towards marketing efforts. The 10 million UCR have a one-month cliff, after which they will be released linearly over 10 months.

The largest percentage of UCR’s supply was allocated towards platform rewards and incentives. Designed to attract liquidity providers and reward stakers, the 24.5 million token allocation is spread across four quarterly activities and represents 24.5% of the supply.

Unicred was founded by Rakesh Lavi, who comes from the world of traditional finance. The head of growth at Scienaptic AI, Lavi spent his formative career years at Goldman Sachs and has been involved with the crypto industry since 2015. The company’s CTO, Chiragsovi, brings experience in scaling SaaS products at Deloitte.

The rest of the Unicred team combines experience in DeFi and legacy financial systems. Unicred’s advisors include Anthony Vo, the CFO of the KardiaChain Foundation and the head of FP&A at the Bank of Hope, Divij Sood, the partner at Blockpact Capital, and Gaurav Dahake, the CEO of BitBNS.

Since its inception, Unicred has partnered with Lauchpool Labs, Alphabit, Exnetwork Capital, Chainflux, Blockpact, and BitBNS, all of which act as the company’s advisors and investors.

Unicred’s pre-seed and seed funding rounds were held on the Launchpool launchpad, which is also set to host its private round token sale (pre-IDO).

Unicred is based on smart contracts forked from Compound and inherits most of the security embedded in the popular lending protocol. For v2 onwards, all necessary audits will be conducted.

A recent graduate of Launchpool Labs incubator program, Unicred’s packed development schedule is set to begin in 2022. The company has its roadmap set out until mid-2023 when it’s expected to reach full functionality.

In the first quarter of 2022, Unicred will launch V1 of the stock Compound fork on the Binance Smart Chain (BSC). Once the protocol is launched on Binance’s DeFi chain, the company will launch its yield generating token UCR. Unicred will also release their NFT monetisation protocol, likely before the money market protocol on BSC. The NFT monetization platform will be deployed on the Solana blockchain.

The third quarter of 2022 will see V2 with the regression algorithm launched on Polygon, while V1 will be deployed across Avalanche, Algorand, and Ethereum. At the end of 2022, V2 will deploy across all protocols.

Unicred expects to launch its testnet for artificial intelligence (AI) and risk calculation learning and form a Unicred DAO in the fourth quarter of 2022.

The beginning of 2023 will be marked by NFTs. In the first quarter, Unicred will launch a testnet for NFT-based borrowing and lending, as well as test out NFT-based uncollateralized lending. Both features are set to go live on the mainnet in the second quarter of 2023.

Unicred was built with an ambitious goal in mind—utilize user data to come up with variable loan-to-value ratio (LTV) and interest rates. While most of the lending protocols base their interest rates on liquidity, Unicred has the potential to break through to the forefront of the DeFi market with its data-driven variable rates.

The platform’s strengths also lie in its plans to integrate NFTs into lending. The huge popularity non-fungible tokens have seen in the past year still remains one-dimensional. Unicred’s plans to utilize NFT-based blockchain identities as the foundation for its uncollateralized lending could make it attractive to users with less liquidity.

Its native cryptocurrency used to incentivize users to interact with the platform also has potential for growth as it begins servicing more customers.

However, Unicred’s potential doesn’t come without risks. A failure to build quality content and adequately promote its upcoming IDO across various launchpads will mean that the entirety of UCR’s supply remains in the hands of large investors. The crypto community has become increasingly worried about the “centralization” of DeFi protocols caused by large seed funding rounds, and is reluctant to interact with a protocol whose entire token supply is held by a handful of venture capital investors.

Even if the platform manages to overcome these obstacles, it still faces danger from violent price swings. A bear market has the potential to wipe out most of the value a small-cap token like UCR might have and drastically reduce the incentives for users to engage with the platform.

Created to provide users with access to uncollateralized lending, Unicred has the potential to position itself at the forefront of the DeFi market. If the platform manages to gain a solid footing with the crypto community and get exposure through organic engagement, rather than paid partnerships, it could see an oversubscribed token sale and subsequent success on the market.

Once fully launched and backed by a strong community, Unicred will have to prove itself by providing users with a smooth lending experience and preventing security issues. If the platform manages to grow alongside the NFT sector, it could be one of the first protocols to offer NFT-based lending.

Disclosure: CryptoSlate was compensated to create this report. For more information, click here.

This project report is brought to you in partnership with Launchpool Labs.