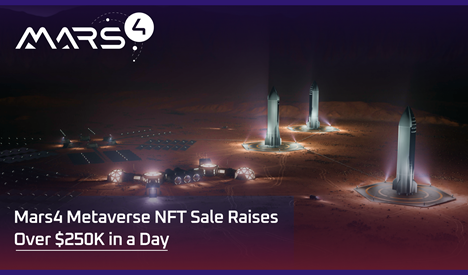 Mars4 is a multi-tiered project that combines NFTs, Crypto and an immersive survival game together that will provide a window to a virtual Mars and a broader range of investment opportunities via the world’s first revenue-generating NFT.

The sale of Mars4 NFTs raised over $250K in a day and saw land plots sell swiftly via the Epoch System.

Mars4 NFTs represent geographically-exact plots of land across the face of Mars, created with data from NASA and other space agencies, to be fully realized in modern 3D graphics. The Mars4 NFTs are released as part of the Epoch system that uses a scarcity model to establish its pricing.

Investors who have purchased Mars4 land NFTs during or before the current Epoch (Epoch 1) will receive 51% of the earnings of the next Epoch (Epoch 2), redistributed in Mars4 Tokens (‘Mars4 dollars’) in one lump sum after the NFTs under that Epoch are sold.

The Epoch System extends from Epoch 0 to Epoch 5 with each Epoch containing a fixed range of NFTs. After an Epoch ends, income generated from that Epoch is always redistributed to NFTs owners who invested in any and all previous Epochs. This system is applied throughout, providing greater returns to investors who hold earlier Epochs.

With over 56,000 NFTs sold, only around 3,000 NFTs remain before the Epoch’s first stage redistribution kicks in. Once Epoch 2 is reached, investors holding the NFTs sold prior to Epoch 1 will receive 51% of the income from Epoch 2’s NFT sales in Mars4 dollars.

Mars4 will be integrating both the Mars4 Token and the Mars4 NFT Land into the upcoming survival game set on the red planet, bringing an entirely new aspect to the investment value of Mars4 NFTs and creating an NFT that can generate revenue for its holders.

Each NFT Land sold is a virtual location that the game is set in, allowing holders and players to make use of their own personal space on Mars. This Metaverse will feature survival and colonization mechanics and reward landowners that build up thriving communities within their NFT land plots and provide returns in Mars4 Tokens for both player and investor.

In addition, the game will make use of the Mars4 Token as its core currency, building an entirely virtual economy that ties the Mars4 NFT to its own convertible token and allows players and investors to create real-world wealth on a virtual Mars.

As each Epoch of Mars4 is reached, the previous Epoch investors will continue to receive redistributed Mars4 Tokens, meaning that the best time to invest and benefit from the Epoch system is always now.