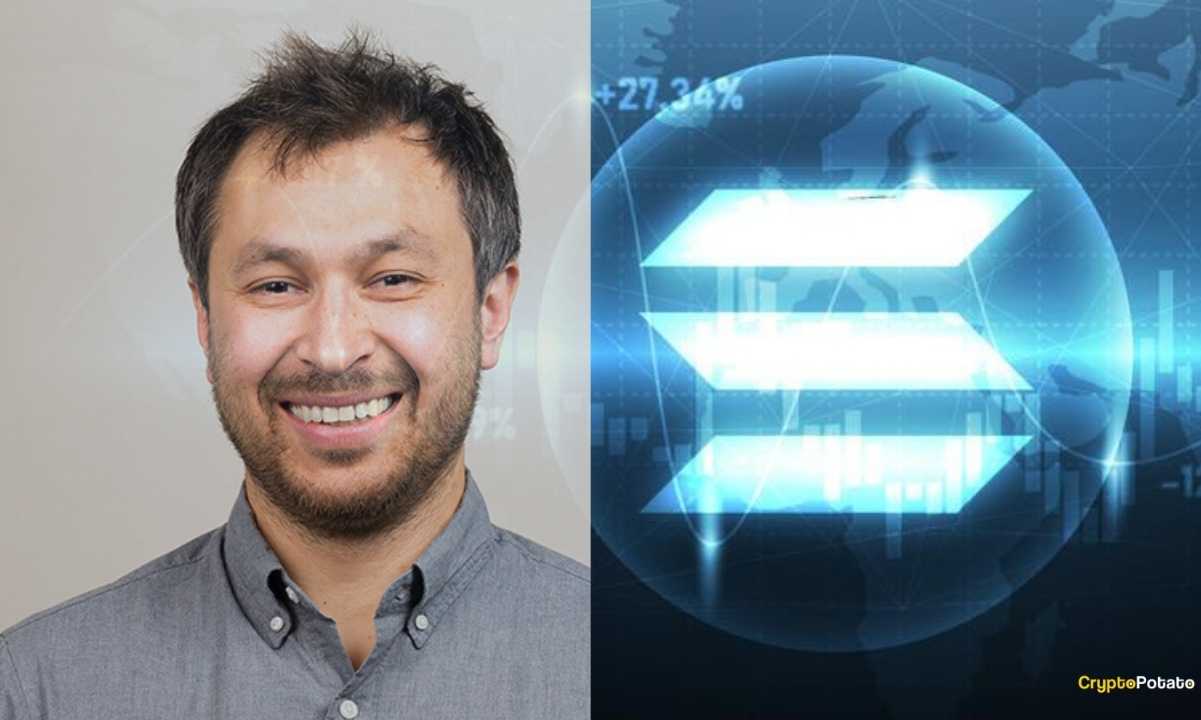 Solana is one of this year’s hottest topics, surging in value, popularity, and overall usage. The cryptocurrency itself is up over 13,000% so far in 2021 and this comes on the back of over $14 billion in value locked in the various decentralized protocols built on Solana.

This growth drew the community’s attention and Solana quickly became one of the most commonly discussed blockchains.

We met Yakovenko on the second day of Lisbon’s Breakpoint 2021 – a 3-day conference dedicated to the Solana ecosystem. Yakovenko must have definitely been happy and proud to see the thousands of attendees and projects, presenting all sorts of dApps and protocols on Solana.

Prior to the conference, Solana held its hackathon, which resulted in more than 500 projects getting $5 million in funding.

An event of this scale says a lot about the Solana ecosystem and brings further notion to the question of whether it’s ready to compete with Ethereum on being the leading Layer-1 smart contracts network. We also pick Yakovenko’s brains on this matter later in the interview.

One of the greatest attributes of the network is the improvement it made in scalability and speed, alongside the improvement of the hardware used by miners. Approximately 2,500 transactions per second (TPS) are already used by the network’s users, according to data provided from the Solana block explorer. The max throughput is around 50,000 TPS and we’re still far away from it, though, the ecosystem is growing exponentially.

We asked Yakovenko about how far are we from the next meaningful improvement in the scale of the Solana blockchain and if he thinks the need for capacity will outpace the speed of hardware improvement.

Yakovenko: “The way Solana works is that it tries to account for all the load on the network by moving as much of the operations through the transaction pipeline.

So even consensus votes are part of transactions and that’s because running a node is like running applications that are subscribed to a real-time state. That application costs bandwidth to the networks, it needs to pay for it. So that’s like the design: you kind of have X amount of capacity to play with, and then you can split up the load to whatever demand is.

What we’ve seen right now (i.e., November 2021) is that we can verify the software at like 50,000 TPS with the hardware that we launched with and with the set of validators when we launched.

However, we see now that the latest and greatest chips like AMD, on a modern system exceed over 100K – 200K TPS. To get that performance in the network, you would need to take this high-performance system deployed globally to every validator. That will happen if there’s enough demand. If we ever get to a point where there’s a sustained load of 10,000 TPS, people are going to want to start upgrading. And we see that this is almost happening.

Humans are bad at generating load. So normal human operation doesn’t do a lot of work: like all of Twitter is about 5,000 tweets per second. But there’s a lot of work to scale the read structure, the data, and all that other stuff. The chain doesn’t have to do that.

If you are running markets like Project Serum, as the depth and the size of the markets increases, market makers are naturally going to take positions much faster. They’ll want much more.

So, that’s where it might run out, and if that happens, it means – go get hardware as fast as you can to ship it everywhere in the world.”

But he doesn’t seem too concerned about the above.

Yakovenko: “We’re also making improvements to the software to be able to leverage more hardware. Things like using GPU’s for signature verification, which in the future should be possible to, as GPU’s structural smart contract execution.

However, you need to have enough meaningful load to compute itself right now, if you look at all of the graphs and our metrics dashboard, most of the load is just network IO ops, it’s just sending packets in, verifying them, sending packets out. But those are good problems, bring them on.”

Layer-1 Solutions: Room for Everyone

As we can see, there are some leading L1 solutions, including Solana, that are rapidly chasing in the footsteps of Ethereum. However, apps built on different chains don’t seem to be as seamlessly interoperable, making us wonder if they ever will be.

In this regard, we asked Yakovenko if he thinks we are moving towards a siloed ecosystem and if in the end there will be one L1 chain to “take it all”?

“No, like what you see now with Audius is a perfect example, token governance stuff is on Ethereum. I think they do about a million or something transactions per day for likes and plays and follows and like user interactions.” according to him.

“So that stuff doesn’t make sense to run on Ethereum, and Solana is as good as any other network. If you’re evaluating, like where should I put my application as, like somebody like Roneil from Audius (i.e., CEO and Co-Founder), the reason they picked Salana is that it’s cheap and fast. You can almost think of a theorem as a settlement layer and Solana’s execution layer. And if you look at your application, what you’re building, you can start composing them however you want.”

Solana’s founder thinks there’s room for several Layer-1 solutions to co-exist. According to him, “you have to design spaces that are Pareto efficient. What that means is that when you make one trade-off, you sacrifice something else.”

“You have to have a meaningful enough improvement in one aspect to where I think that you’ll have stickiness. I think Ethereum 2.0 is going for this minimum socialized cost of the hardware, they’re trying to go for the lowest possible validator to the point that the validators didn’t even hold the entire stay.

They’re just kind of holding the ratio codes. And that’s a different approach than I want to receive all the information there’s on the world from the chain as fast as possible. Which is what Solana picks.

Now you have what use case are you building and settlement governance. That’s what Ethereum is great for, but I need an effective real-time application with a lot of users, even if it’s non-financial like Audios, you want all of that data in one shard as fast as possible.

SBF and FTX: The Turning Point for Solana

In July 2020, FTX and Alameda’s CEO, Sam Bankman Fried (SBF), posted a Twitter thread that revealed the Project Serum. He stated that of all the blockchains available, they chose Solana.

In retrospect, it seems this was an excellent catalyst for the hypergrowth of Solana. Yakovenko doesn’t deny it was a turning point for his blockchain.

“For sure it was a turning point, but also for Serum. I think what it demonstrated was that you could take something very complicated, like a central limit order book that has never been done before, and ship it on this blockchain that no one ever heard of, at the time.”

The fact that people were able to do that right in a very short amount of time, about for four weeks, and actually go live and have meaningful liquidity and start like running full-style DEX.

I think that the real catalyst is that proof point. We haven’t really seen folks outside of the Solana ship, like complex projects that quickly and I don’t know if it’s just culture, or that Rust provides a better system tooling.”

When asked about future plans and developments coming out of this relationship between Serum-FTX-Solana, the co-Founder answered:

“I guess how we work with FTX or how anybody I think works with FTX, is that if you have a really good idea and you just want to get it done if you talk to them and everybody’s aligned, it just happens. That’s like the magic of working with them.”

In regards to the future of crypto, Yakovenko says he’s really excited about NFTs but sees them as these precursors to social networks.

“These narratives are going to take a few years to play out. There’s obviously a centralized market that runs up to: it’s the ad exchange. What blockchains are good at and what’s been proven in running decentralized markets? These are things for people to coordinate. It seems like NFTs are like the first foray into social networking that is not monetized by ads.

Some Play-to-Earn Games Shipped too Fast

When asked about the most recent hot trend in crypto NFTs and the play-to-earn model, the Solana Founder replied that some just shipped too fast, which is – according to him – the most important thing in crypto nowadays.

“Games take a really long time to ship. So given that they shipped that, they shipped as fast as they could, which is probably the most important thing in crypto right now is shipping as fast as you can.”

From my personal experience, seeing and meeting great developers who currently build the next stage of Play-to-Earn, I shared with Anatoly that it is starting to feel like things are moving quickly in terms of game quality.

He agreed. “Aurory, Star Atlas, and I’m missing a bunch of games too. I’m really excited about those. I think that play-to-earn is a really tricky thing to get.

It also intersects this idea of the creator economy as people that are building effectively, you’re cheating the game as a creation tool. As its own little social network, but with assets that are not fungible across, maybe the entire ecosystem, but even within that game, like you look at something such as World of Warcraft, all those things always had secondary markets for all the items. It’s tricky to get.

I’m excited to see people try it. There’s definitely this idea that, sometime in the future, maybe we were all NPCs (non-playable characters) in somebody else’s quest.”

The Governance Model of Solana

The importance of a structured model to make decisions and to implement changes to a blockchain cannot be ignored. It seems that a good governance model is a must for a dApps-based blockchain to stay relevant for years to come.

When asked to elaborate on the current and planned governance structure of Solana, Yakovenko said:

“The governance is almost like old school release engineering processes for software. If you actually look deep into it, like what we have is a governance dashboard. That was a reference implementation that the Mango team took forward and basically functions as ‘let’s propose a new release, everybody that wants to review reviews it and then boats to do the upgrade’.

That’s very much a software-real process for upgrades. It reminds me of just open-source software development. What I hope to see is that the tooling to analyze the changes be able to look at the differences and have some assertions about audits and code quality and things like that. But those get better over time.”

Where do you see Solana in five years from now?

Yakovenko: “As an engineer, if it’s not going to happen in two weeks, there’s a 50% chance it’s never going to happen. So we don’t have roadmaps for that reason. We call it fire-driven development. In five years, I guess hardware improvements should at least make it 4x faster. I’m hoping to break the one gig of a barrier of more than a million TPS possible, but we’ll see. So there’s a lot of time, but also a lot of work ”

And lastly, speaking about Solana’s market cap in 5 years, Yakovenko doesn’t care. “I don’t care. It’s just like I want to build something that people want to use. That’s the most important thing.”