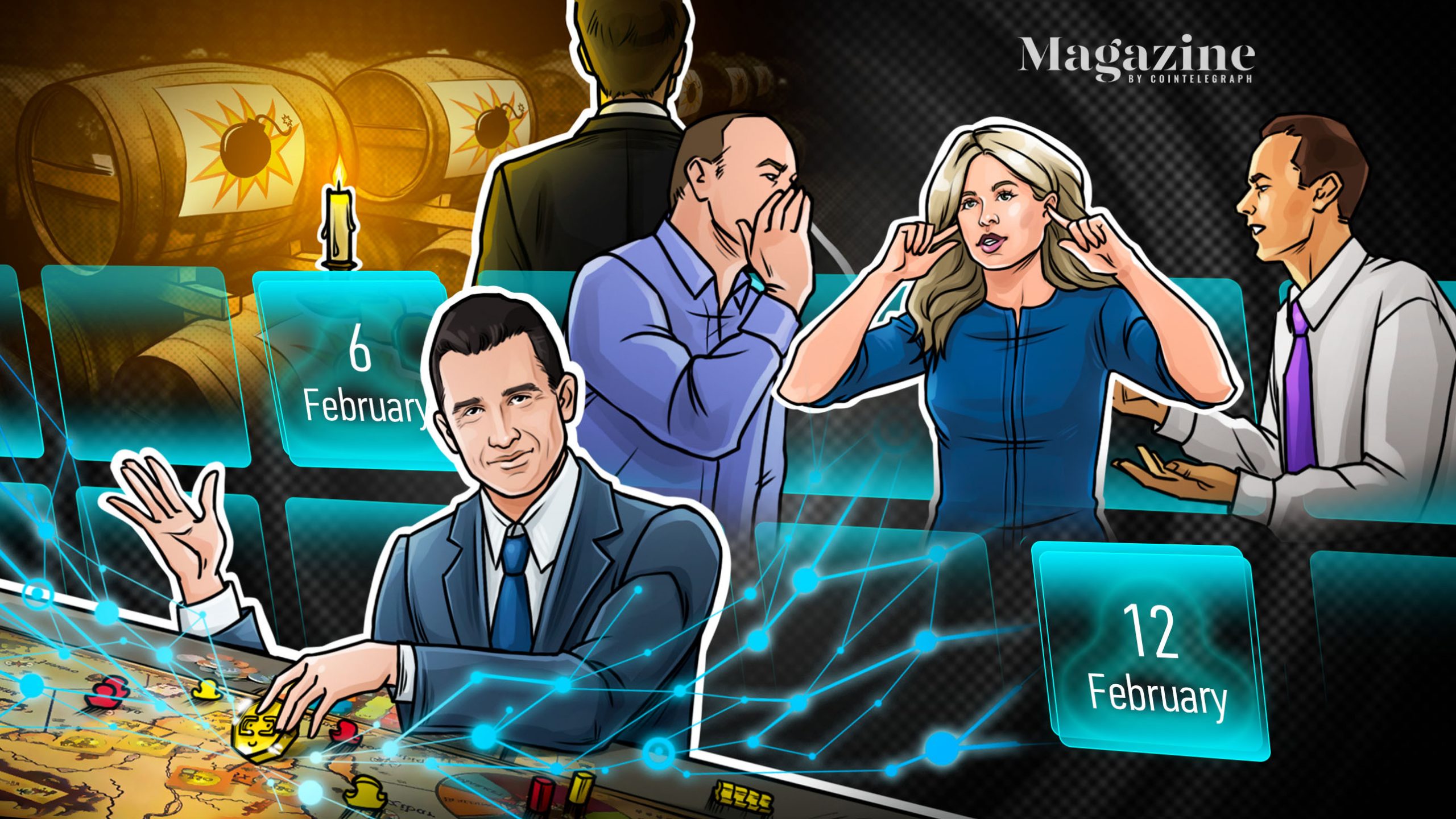 Coming every Saturday, Hodler’s Digest will help you track every single important news story that happened this week. The best (and worst) quotes, adoption and regulation highlights, leading coins, predictions and much more — a week on Cointelegraph in one link.

The Russian government and central bank made an agreement to regulate crypto as an “analogue of currencies” instead of “digital financial assets.”

The updated regulation is part of a draft law that is slated to launch on Feb. 18, and will see approved cryptocurrencies such as Bitcoin function in lawful exchanges through the banking system or licensed intermediaries.

As part of the incoming framework, crypto transactions worth more than 600,000 rubles ($8,000) would have to be declared; otherwise, such transactions could be considered a criminal act. Those who illegally accept cryptocurrencies as payment will incur fines.

This week, Apple unveiled a new Tap to Pay feature for its iPhones that will enable businesses and merchants to conduct contactless point-of-sale transactions with Apple Pay, credit cards, debit cards and digital wallets.

The move also enables customers who use crypto payment methods such as Coinbase Card and Crypto.com Visa Card to use their holdings to make payments via Tap to Pay. However, it will most likely involve the conversion of crypto to fiat in real time to do so.

Apple announced Stripe as the first platform to offer Tap to Pay on the iPhone and indicated that other payment platforms and apps will introduce the feature throughout 2022.

XRP gains 30% after Ripple gets permission to explain ‘fair notice defense’ vs. SEC

The price of XRP surged 30% this week on the back of positive developments in the long-running court case between Ripple Labs and the United States Securities and Exchange Commission (SEC).

According to court documents from last week, Judge Analisa Torres permitted Ripple to respond to the SEC’s memorandum of law in support of the motion to strike Ripple’s fourth affirmative defense. The judge also ordered for the unsealing of three documents concerning the case, including two email threads belonging to Ripple CEO Brad Garlinghouse and co-founder Chris Larsen respectively, as well as Garlinghouse’s deposition notice.

Shortly after the news was published, the price of XRP rallied around 30% between Feb. 3 and Feb. 7. The gains have held up well over that period, with CoinMarketCap data showing a 32% gain in XRP’s price over the past seven days at the time of writing.

YouTube is looking at integrating NFTs, blockchain and Web3 tech into its platform in a bid to roll out new features for its partnered creators. In a Thursday blog post, YouTube’s chief product officer Neal Mohan also stated the firm is aiming to ramp up its metaverse-based services.

Mohan outlined that YouTube creators are looking for new ways to make content and add revenue streams, and the Web3 tech could be the solution, stating:

“Web3 also opens up new opportunities for creators. We believe new technologies like blockchain and NFTs can allow creators to build deeper relationships with their fans. Together, they’ll be able to collaborate on new projects and make money in ways not previously possible.”

In a move that seems entirely unnecessary, fast-food giant McDonald’s was said to be eyeing the metaverse this week after reports surfaced that the firm had registered 10 virtual world-related trademarks.

Based on the application, McDonald’s seeks to provide downloadable multimedia files for artwork, audio and video files, and NFTs. At the same time, it’s also working on providing virtual concerts and events. 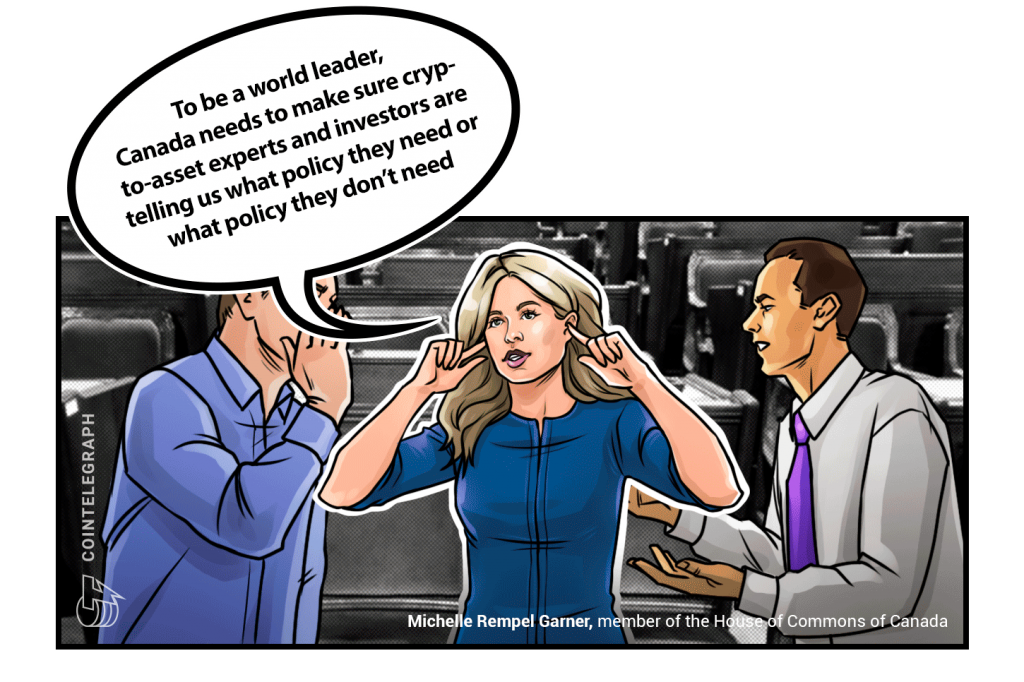 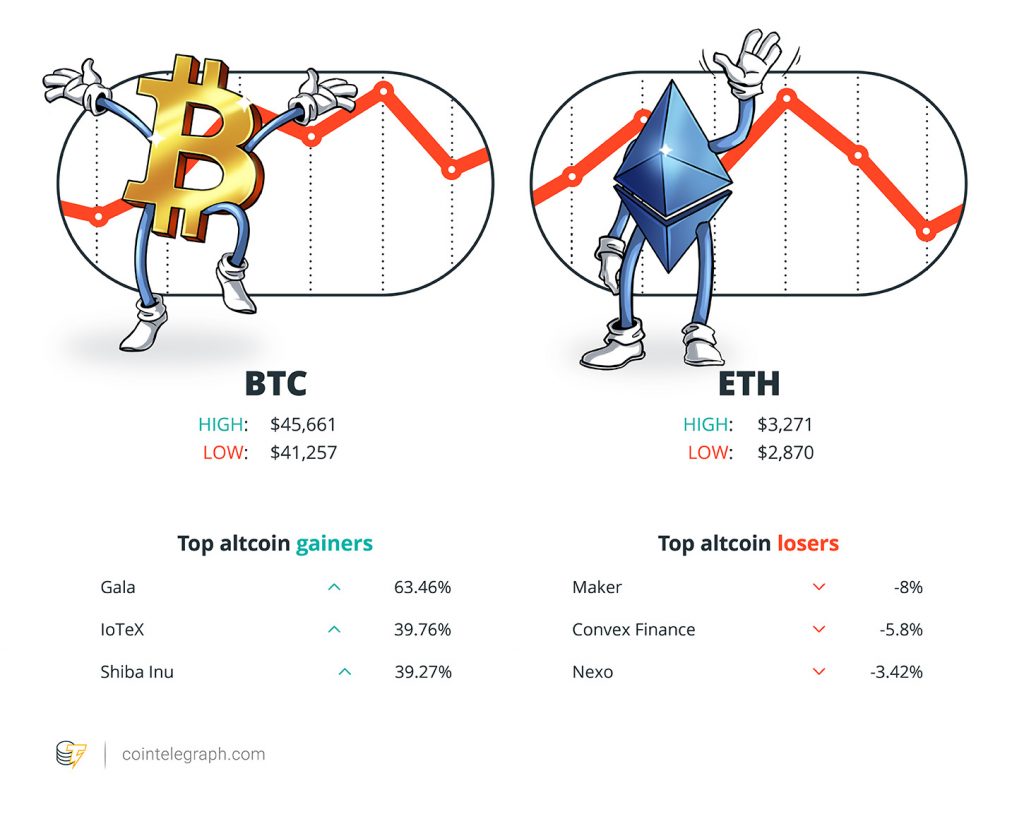 For more info on crypto prices, make sure to read Cointelegraph’s market analysis.

“After working in traditional finance for over a decade, I became disillusioned by the many limitations and injustices I witnessed. The industry is plagued by unreasonable fees and inefficient systems. In various ways, these all serve to favor the wealthy and suppress the underprivileged.”

Michelle Rempel Garner, member of parliament in the House of Commons of Canada

“I think you’re going to see every brand that you can think of make these [metaverse-related trademark] filings within the next 12 months. I don’t think anyone wants to be the next Blockbuster and just completely ignore a new technology that’s coming.”

“As Web3 and blockchain technologies move forward and the crypto market comes of age, we know that media is an essential element to build widespread consumer understanding and education.”

“Today’s arrests, and the department’s largest financial seizure ever, show that cryptocurrency is not a safe haven for criminals.”

“There are dozens of artists preparing lawsuits against OpenSea for selling infringing NFTs. These examples are a sneak preview of a wave of litigation heading towards the space. It’s both good and bad in that it discourages creativity and growth in some ways, but it’s beneficial because it will ultimately help provide some guidelines in terms of clear legal parameters and guidelines for the space.”

“The current [Bitcoin] supply dynamics can best be described as a powder keg. The question remains who lights the match.”

Prediction of the Week

A quarter of people will have spent time in the metaverse by 2026: Research

Tech research and consulting company Gartner published a report on Monday estimating that 25% of people will be spending at least one hour a day in the metaverse by 2026, for activities such as work, shopping, education, socializing and entertainment.

The ambitious estimate appears to be the brainchild of Gartner vice president Marty Resnick, who predicted in the report that around 30% of the world’s organizations will have metaverse-based products and services within the next four years:

“Eventually, they will take place in a single environment — the metaverse — with multiple destinations across technologies and experiences.”

FUD of the Week 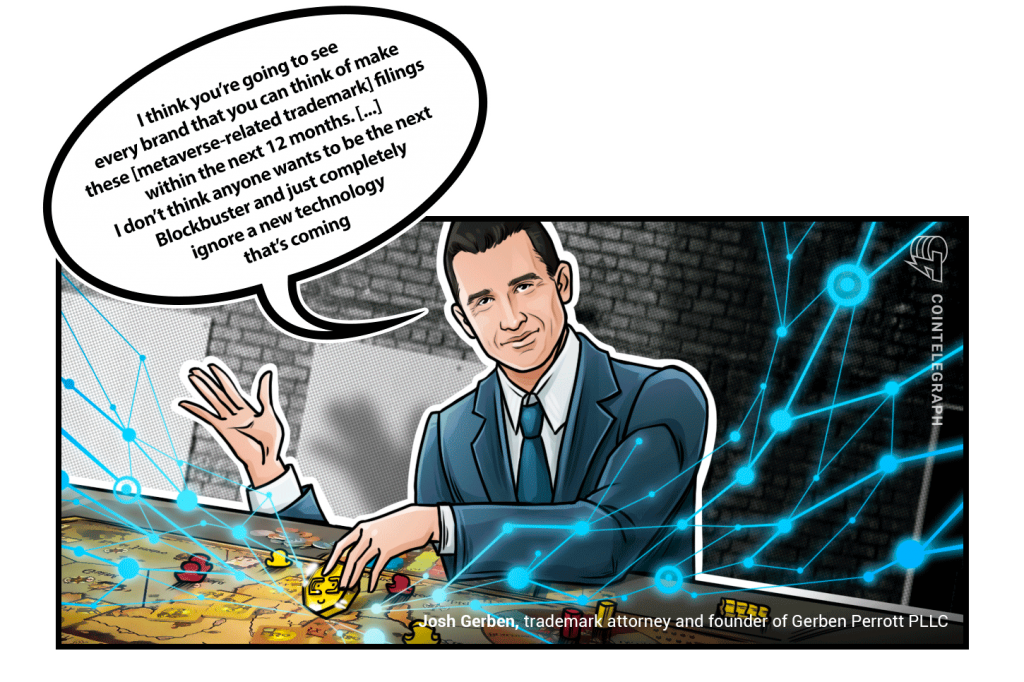 DoJ seizes $3.6B in crypto and arrests two in connection with 2016 Bitfinex hack

The U.S. Department of Justice dropped a bombshell announcement on Tuesday, revealing that it had made arrests of two individuals and seized 119,756 Bitcoin ($5.1 billion at current prices) stolen from the Bitfinex exchange in 2016.

Ilya Lichtenstein and his wife Heather Morgan are alleged to have conspired to launder crypto connected to the infamous Bitfinex hack, with the DoJ stating that it had traced 25,000 siphoned BTC being transferred to financial accounts owned by the pair.

“In a futile effort to maintain digital anonymity, the defendants laundered stolen funds through a labyrinth of cryptocurrency transactions,”  said Deputy Attorney General Lisa Monaco. “Thanks to the meticulous work of law enforcement, the department once again showed how it can and will follow the money, no matter what form it takes.”

Central Bank of Ireland nixes crypto funds: Too difficult ‘for a retail investor’

The Central Bank of Ireland stated this week that it may not approve crypto investment funds because they are supposedly too complicated for the lowly retail investor.

The comments were made via the February 2022 “Securities Markets Risk Outlook Report” in which the central bank warned that the crypto market provides a “potential threat to investor protection.”  The central bank said:

“The Central Bank is highly unlikely to approve a UCITS or a Retail Investor AIF proposing any exposure to crypto-assets, taking into account the specific risks attached to crypto-assets and the possibility that appropriate risk assessment could be difficult for a retail investor without a high degree of expertise.”

The British Broadcasting Corporation (BBC) pulled a documentary featuring a 20-year-old crypto trader who claimed to have turned $50 into $8 million last year. The story was set to explore how Hanad Hassan made his fortune and started to give back to the community following his newfound wealth.

The BBC’s promo for the documentary stated that Hassan launched a crypto project called Orfano that donated all of its profits to charity, stating that as much as $200,000 had been allocated to a good cause last year. However, The Guardian essentially called out the BBC for conducting shoddy research, with the publication’s media editor, Jim Waterson, writing:

“The Guardian asked the BBC if it was confident in [Hassan’s] claimed financial returns and questioned why the program’s promotional material did not mention that Hassan’s cryptocurrency Orfano was abruptly shut down in October, with many unhappy investors claiming they were left out of pocket as a result.”

“The BBC swiftly said it had withdrawn the show but did not make any further comment on its editorial checks,” Waterson continued. 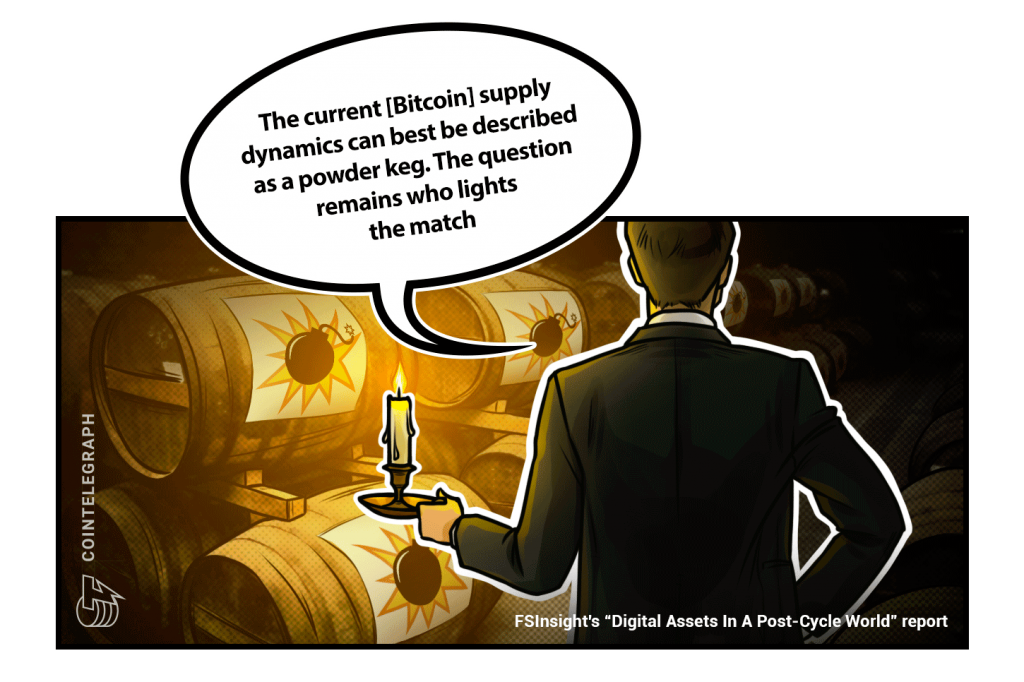 Robbie Heeger’s Endaoment has facilitated the donation of over $30 million of cryptocurrency to 243 different charities. These donations come from altruistic cryptocurrency investors who are also partly motivated by reducing their tax burdens to Uncle Sam and keeping more of their profits.

The virus killer: How blockchain contributes to the fight against COVID-19

Blockchain-powered solutions have been on the front line of the battle against Covid-19, yet their potential has been underutilized.

Music in the Metaverse creates social and immersive experiences for users

Music is becoming a key feature in the metaverse, but will challenges hamper adoption?