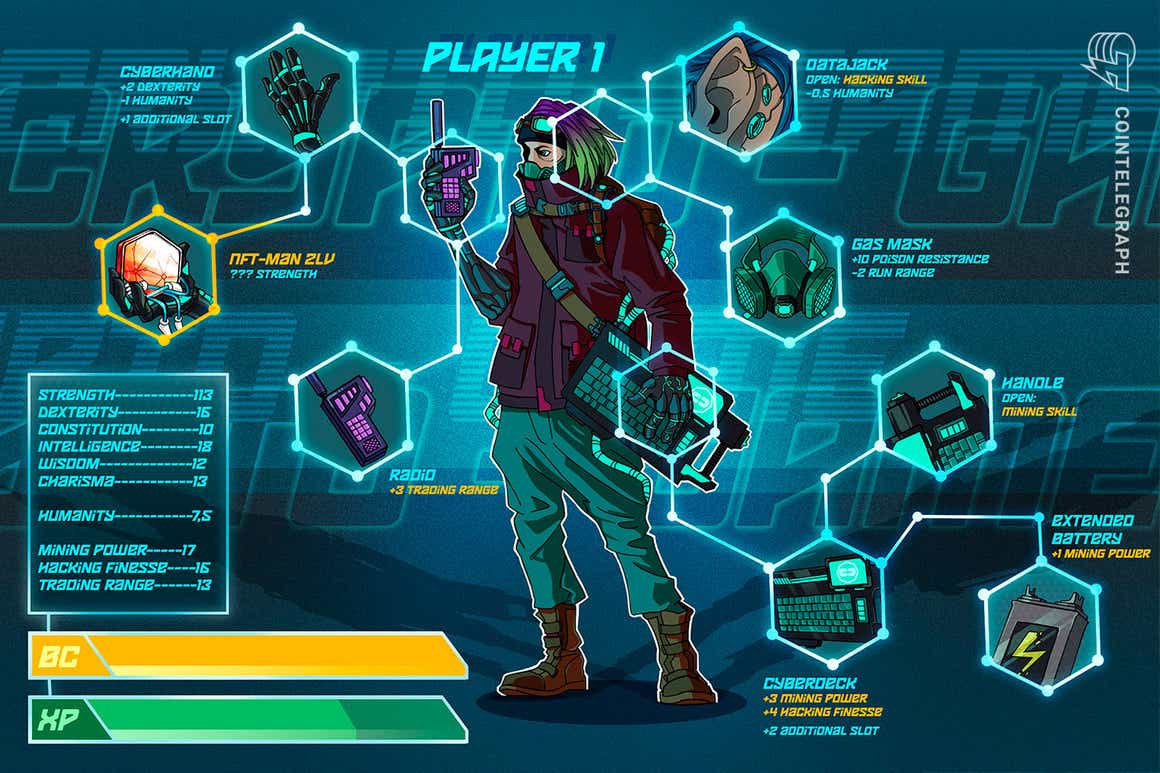 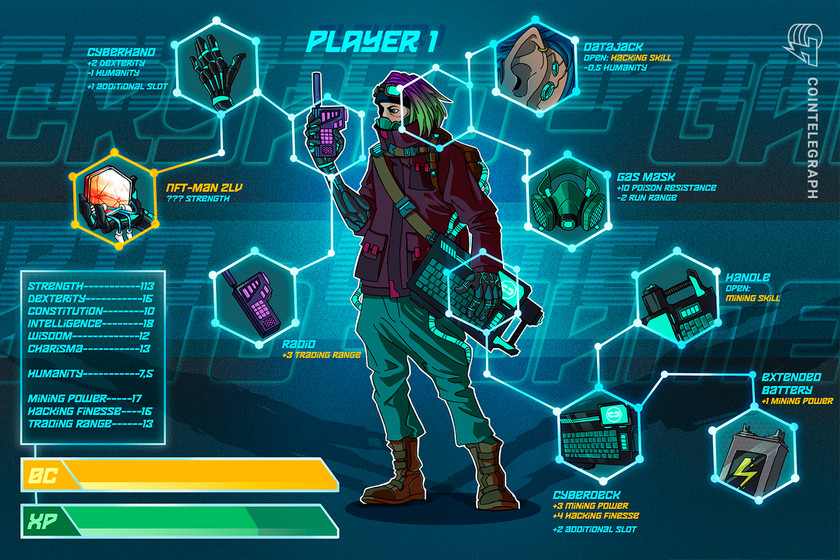 The gaming industry is a multi-billionaire dollar market traditionally dominated by giant corporations like Atari, Sony, Microsoft and Nintendo, among others.

Throughout their history, these major firms have aimed to provide entertaining gaming experiences to attract new players and expand their market share.

However, nonfungible tokens (NFTs) are attempting to give gamers a financial incentive for playing games in the form of NFTs, in addition to providing an engaging gaming ecosystem.

These games, known as play-to-earn (P2E) games are played in a Metaverse that is essentially a fictional universe. The P2E gaming model dictates that the users of the platform are financially rewarded for their time and effort within the game. Due to this, the model has a chance to gain a portion of the $175.8 billion global gaming market that is touted to grow to more than $200 billion in 2024, as per a report by Newzoo.

Minh Doan, the co-founder of Warena, a personalized NFT game, told Cointelegraph more on the relevance of this model. He said:

“Today, we call the play-to-earn model on the blockchain GameFi — the combination of decentralized finance and game mechanics — has become a real sensation in the market due to the fact that during gameplay, users receive tokens that can grow by tens and even hundreds of times in value.”

The protocols in the NFT gaming sub-sector have been gaining a lot of traction in terms of users and volumes. Their associated native tokens have been performed extremely well too. The native token of the Ethereum-based NFT game Axie Infinity (AXS) has been leading the charge for the sub-sector. The token has posted 83.35% gains in the last 90 days, 706% gains in the last 180 days and over 73,000% yearly gains.

AXS currently changes hands in the $120 range and has risen to become one of the top 25 cryptocurrencies in terms of market capitalization as per data from CoinMarketCap, making it the only NFT gaming-related token to make the cut. The platform itself has witnessed impressive growth in terms of users and volumes since its launch. According to data from Dappradar, there has been trading activity worth $2.6 billion on the platform with 836,149 traders participating. The platform has also announced a staking program for its native token.

Related: The Metaverse, play-to-earn, and the new economic model of gaming.

Cointelegraph spoke to Alex Salnikov, the co-founder and head of product of Rarible, an NFT marketplace, who explained more on the drivers of this growth noticed in the NFT gaming platforms, both in terms of volume and users. He said:

“This growth aligns with the broader acceleration of the NFT market and seems to highlight the versatility of use cases for NFTs. Also, gamification has generally been trending in crypto and it matches particularly well with the concept of NFTs that are so closely tied to interactive and fun community engagement experiences.”

He also added that the value proposition of blockchain technology is understandable and native for the gaming industry, including P2E experiences and in-game assets with clear provenance.

Even though the most utilized blockchain network for the deployment of decentralized applications (DApps) is Ethereum, in the NFT gaming ecosystem, there are several other blockchain networks like Binance Smart Chain (BSC), Polygon, Hive, Harmony, Solana and Flow that are also gaining large user bases along with growing volumes.

Salnikov further mentioned, “Polygon is generally considered to be one of the leading blockchains for gaming due to its EVM-compatibility, high throughput and low gas fees. It’s also the leading sidechain of Ethereum, meaning that it’s connected to the main NFT ecosystem on layer one.”

Cointelegraph spoke with Jesse Reich, the co-founder and CEO of Splinterlands, one of the leading NFT gaming platforms in terms of users, about the protocol’s choice of the Hive network to build their game. He said:

“People have thought our choice of Hive has been bizarre since the early days, but it has a freemium structure. Players can sign up with a username and password and get started. It’s hard to replicate that on POW blockchains with gas fees.”

On Oct. 12, Binance announced a $1 billion accelerator fund for the overall development of the BSC ecosystem. Popular games on BSC like MOBOX: NFT Farmer, Faraland, ZOO Crypto World, and CryptoBlades are bound to grow as a result of this fund leading to massive adoption of the network.

Despite the growth seen across various platforms and networks in the NFT gaming sub-sector, the long-term proposition of these games could be in question, since gamers from the traditional gaming community are used to playing games that are extremely well designed. These titles also boast impressive gaming ecosystems, as a majority of them are backed by large corporations that have ample resources and development infrastructure.

At this stage, this cannot be said of the games that use NFTs, native tokens and other incentives to reward users as they are still in the nascent stage of their development and thus, are not as sophisticated. Thus, it is essential to gauge the time and effort the users of these platforms are putting in to earn these rewards on games that might not be as stimulating as the mainstream games that are relatively easy to access as well.

Reich mentioned further that “First and foremost, there has to be a game that’s fun to be a mega-hit. Grind-to-earn, I’m sure, will be a thing along with play-to-earn and it’ll come down to what minimum wage is someone willing to accept for computer click work.”

Doan stated that these games are a completely new generation of games that are hard to compare with traditional PC games. He said:

“This is something of a leisure economy, where users are paid to play games and can later multiply their income like real traders. The beauty of NFT games is that young people — the main target audience — easily understand trends and technical nuances that are sometimes difficult for other users.”

Hurdles ahead for blockchain gaming

Despite the rapidly expanding NFT gaming ecosystem, the traditional gaming giants are yet to adapt to blockchain technology or NFT integrations in their pre-existing games. In fact, a few of them have explicitly ruled out the possibility.

Valve recently announced the removal of blockchain games from its platform Steam and even asked users to not publish any content related to cryptocurrencies and NFTs. The Steam marketplace hosts immensely popular games like Counter-Strike, Battlefield, Halo and Resident Evil, among thousands of others.

The corporation flirted with crypto back in 2016 when they announced that they would accept Bitcoin (BTC) payments, but soon put a stop to the service, citing high fees and volatility.

In the aftermath of this ban, the CEO of Epic Games, Tim Sweeney, announced that his company is open to hosting and supporting games that use cryptocurrencies and blockchain-based assets.

Epic — the firm behind the immensely popular Fortnite — did note that developers will not be able to use the platform payment service to accept cryptocurrencies. Instead, they will need to use their own payment systems. This could become a barrier to adoption and inclusion for games without this infrastructure.

The perception held by Valve extends to regulators in the gaming industry as well. On Oct. 14, the Gambling Commission of the United Kingdom began an inquiry into one of the most popular NFT fantasy soccer games, Sorare. The gambling watchdog is evaluating whether the platform would need an operating license and if their services constitute gambling.

Sorare has categorically stated that even though it is willing to have an open dialogue and engage with regulatory bodies to explain its game, it does not “offer any forms of regulated gambling.” The platform is valued at over $4.3 billion and growing at a fast rate.

Since the entire ecosystem is at such a nascent stage in its development, it seems to be more of a waiting game to gauge the true potential, utility and long-term propositions of integrating crypto, blockchain and NFTs in gaming ecosystems.