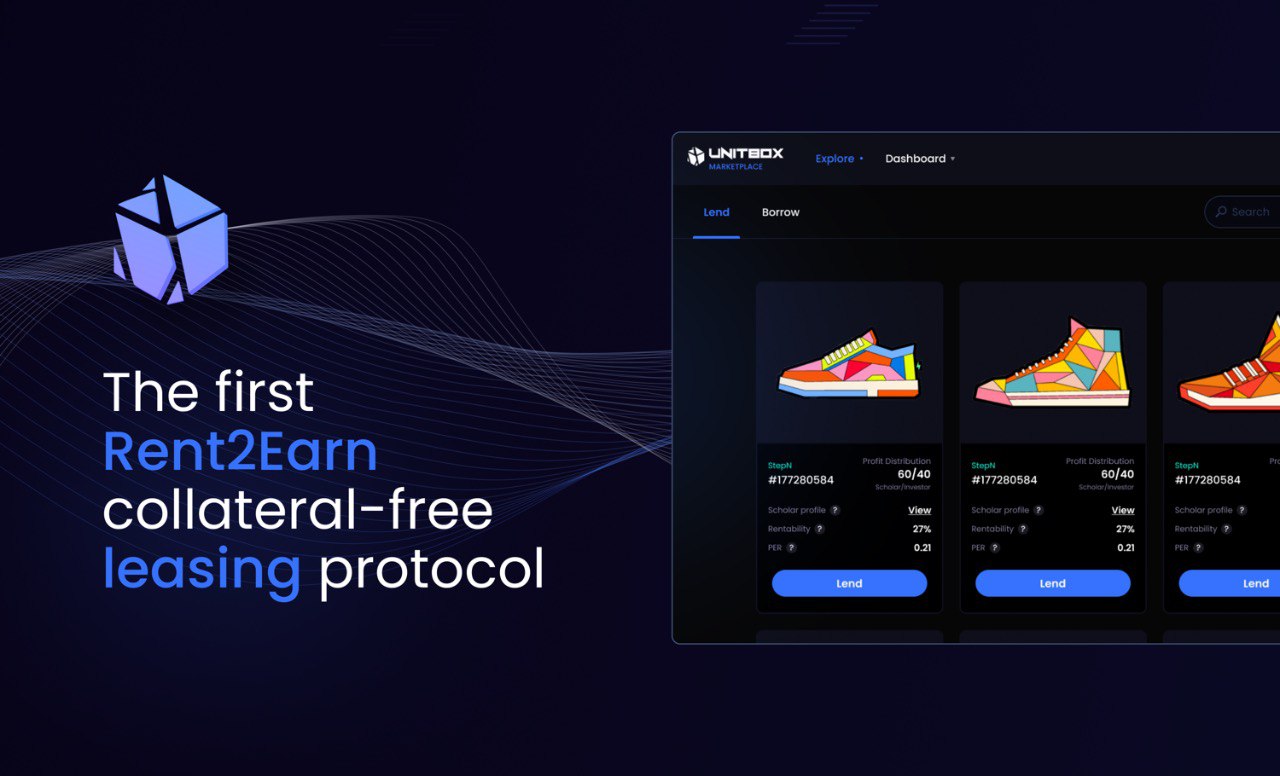 With the total value locked in GameFi crossing $28 billion, game development giants the likes of Electronic Arts and Ubisoft are exploring the Play-To-Earn (P2E) space. Originally perceived solely as entertainment, today gaming has transformed into a means of making a substantial profit.

It’s now evident that the NFT rental systems will become one of the core instruments of the GameFi and DeFi industry. Yet, the nascent industry still lacks an aggregator that would connect members of the GameFi ecosystem, give brands a better idea of consumers’ intent, lower entry barriers, and create more trust in the space, nor tools that would allow monetizing NFTs to make a profit.

UNITBOX DAO is the first custody-free NFT renting and leasing protocol, as well as the first use case of the wrapped NFT (wNFT) technology. It leverages DeFi mechanics to aggregate millions of crypto investors, renters (guilds, scholars), and players to provide them with access to its one-of-a-kind Rent-to-Earn model.

Launched in Q3 2021 in Dubai by Anton Link, UNITBOX offers collateral-free renting and leasing for NFTs. Through the protocol, users can buy, sell, rent, and lease non-fungible tokens on the native marketplace, while games and other projects (e.g. marketplaces), can use it to integrate the rental service into their systems.

The platform allows NFT owners to lease their non-fungible assets, while the payouts are distributed automatically on the daily basis via blockchain mechanics. The investor can call back their non-fungibles at any time and get his investment returned.

The rental system is powered by the know-how wNFT technology created by UNITBOX Co-founders, which won top-3 at a Binance hackathon and received grants from Rarible, Polygon, and NEAR Protocol. The non-fungible gets wrapped in wNFT for the duration of the rent and is unwrapped back into the original NFT as one of the participants calls the deal back. All actions are carried out through a smart contract.

UNITBOX brings in trust by guaranteeing the reliability of any deal. All transactions within the system are fully transparent, while the investments and payouts are also distributed via DAO-governed mechanics. This approach helps effectively solve the trust issue and offer a new investment product with an understandable and transparent business model for the entire industry to benefit from.

Who can benefit from using UNITBOX

UNITBOX empowers transparent investing into P2E while lowering the entry barrier, so crypto investors can start earning instantly on rent and staking. For guilds, the platform offers NFT assets rentals & delegation in its DAO ecosystem, well as advanced guild management tools and infrastructure.

Scholars on UNITBOX can enjoy jobs and intuitive profit-tracking through various earning, ambassador, and airdrop programs & other tools. On top of that, both guilds and scholars get access to an extensive gamer database, as well as liquidity-raising instruments to increase revenues.

GameFi players, in their turn, no longer need to purchase expensive NFT objects to earn money in games: they can start earning by renting out non-fungibles they need, share profit and get a chance to become scholars. The platform enables a plethora of handy features and dashboards for all users to ease decision-making and governance processes.

Staking is the main utility function of the native $UNIT token. A percentage of the profits of investors and tenants – 7,5% of the success fee – will go to the project treasury, to be distributed proportionally among the stakers.

This model creates an incentive for the organic growth of the token rate, as well as a cycle of dependency on the marketplace customers. Market mechanisms will support the price of the token and set a price floor for $UNIT. Therefore, with the growth of the GameFi industry, the number of UNITBOX users will increase – and so will the rate of the native token.

The project’s team, led by CEO and Founder Anton Link, includes tier-1 professionals with leading crypto, investment banking, and tech backgrounds. All of them have in-depth experience working on DeFi projects.

UNITBOX started 2022 by rolling out the protocol prototype, developing and testing economy logic, performing key hires, and opening a strategic financing round.

In Q2, the team plans to finish the development of the UI/UX frontend, launch the native rental marketplace, open alpha-build early access for $UNIT holders, and hold private and public sales rounds for the token.

Q3 will see NFT oracle integrations, code freeze, and security audits, as well as the listing of $UNIT on tier-1 exchanges. And lastly, the launch of UNITBOX DAO protocol, completion of staking vaults, wNFT rentals for B2B, and the launch of governance mechanisms are planned for Q4.