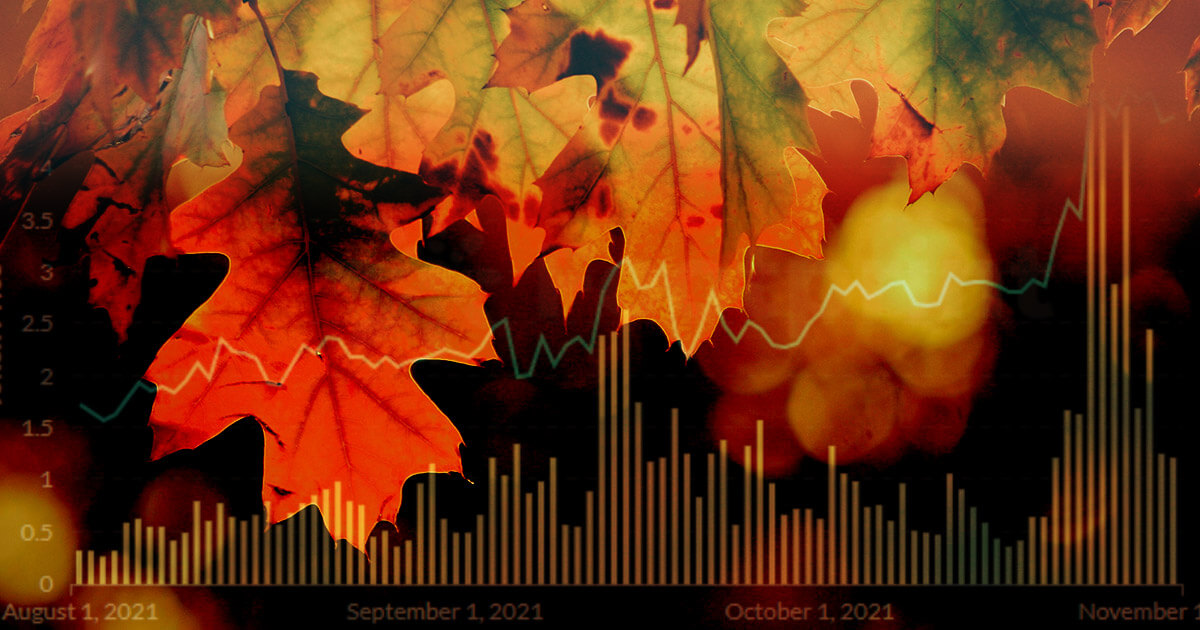 Following a volatile September, the crypto market rebounded to an all-time high in October, with DeFi’s TVL exceeding $250 billion and BTC pushing past $66K.

But with all eyes on rising token prices, it was easy to miss some trends and announcements that look likely to impact the market in Q4 significantly.

With Grayscale announcing a series of plans to convert bitcoin funds into spot ETFs and digital asset investment firm Valkyrie listing its bitcoin futures ETF on NASDAQ, the price of BTC climbed from $48,000 to around $60,000. On Oct.20, BTC even reached a record high of $66,000.

Investors now have very strong support for the thesis that institutions will gradually purchase crypto assets. This means we can imagine a world where banks make massive whale purchases of BTC and other tokens.

The TVL ranking from Footprint Data shows that Aave and MakerDAO once surpassed Curve in the middle of the month to become the projects with the highest DeFi TVL, but quickly fell back behind.

As of Oct. 31, Curve was still ranked number one on the network with $19.2 billion TVL. Curve’s TVL grew by 34% for the month of October and its token price reached $4.7, the highest in almost a year. MakerDAO also had a 37.68% TVL growth rate.

The data indicates that the lending market is highly competitive—with picking a favorite for market leader nigh impossible. In other words, now is not the time to put all your eggs in one basket in your DeFi lending play.

Small but numerous chains eat away at Ethereum’s monopoly

Since its inception, Ethereum held a near-monopoly in the public chain space until Binance came onto the scene in February 2021, followed by Terra and Polygon.

Data from the past month indicate a clear trend towards further fragmentation rather than consolidation.

Footprint Data shows there are 11 public chains with a TVL growth of more than 100% in the past 30 days. Among them, Tron’s growth rate was 1119%, bridging its TVL to $7.6 billion, making it the seventh chain. Other public chains such as Fantom, Arbitrum and Avalanche grew by more than 100%.

The result is that Ethereum’s market share went from 73% in August to 65% in October—an 8% drop in just 2 months.

New kids on the crypto block in October

The TVL of Secret grew 222% as tightening regulations around public chains make blockchain users refocus on privacy. PriFi—as it’s now called—will soon become the preferred choice for crypto, and Secret, the first chain with privacy protection, will increase. (At least, so goes the reasoning of the chain’s supporters.)

Another chain that shouldn’t be ignored is NEAR. While its 86% growth is slow compared to the month’s other breakouts, the chain’s team recently announced a huge $800 million ecosystem development fund to support NEAR-based development projects, institutions and individuals. Aurora, a NEAR-based solution to scale Ethereum dApp projects, also completed a $12 million funding round in October.

Other public chains such as Sifchain, Harmony, and Celo each had over 200% growth in October and are also noteworthy. Although the new public chains are still nowhere near as popular as the Etherchain, market share continues to divide as they present new use cases and solve problems developers and users face with Ethereum.

With the introduction of national policies around crypto in the U.S., China, Australia, and others in September, the market briefly became volatile but a record-breaking October demonstrated we’re still riding the bull for now.

On a more long-term trajectory, the token price drop and regulations were followed by institutional support and buy-in for blockchain. While controversial amongst blockchain enthusiasts, this has created a perception of reduced market risk among established financial players. Is this the news that banks and investment firms, tired of seeing their returns blown out of the water by crypto traders, were waiting on as their signal to jump in?

This report was brought to you by Footprint Analytics.

Footprint Analytics is an all-in-one analysis platform to visualize blockchain data and discover insights. It cleans and integrates on-chain data so users of any experience level can quickly start researching tokens, projects and protocols. With over a thousand dashboard templates plus a drag-and-drop interface, anyone can build their own customized charts in minutes. Uncover blockchain data and invest smarter with Footprint.