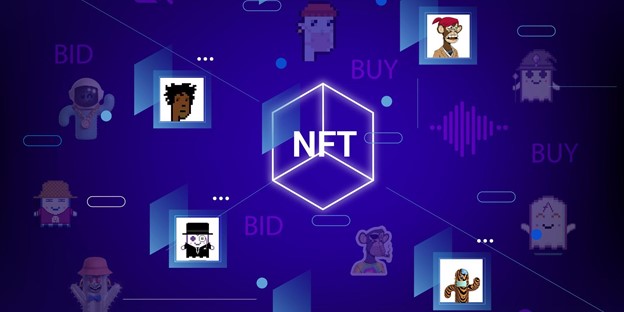 2021 was a massively successful year for NFT’s, blowing the roof off what was expected, and saw growth skyrocketing by over 705% to $338 million including several NFTs collections and projects . In February, the total amount of transactions on the NFT trading platform Opensea surpassed $90 million, with the total number of users exceeding 50,000. In August, 6 months later, the trading value hit $3.4 billion. In the same time, CryptoPunks reached a maximum transaction price of 1.5 million US dollars.

As the market matures, we’ve found some hidden NFT treasures that could be worth a lot of money. The top five hidden gems in the NFT world are:

Yes, the one that was recently featured on the tallest building in the world, aka Burj Khalifa!

Momento is a DEFI + NFT project that tries to exhibit some of the most exciting events from the previous decade to evoke a sense of nostalgia in individuals through art.

Unlike most NFT ventures, Momento does not create NFTs for the sole purpose of holding but rather to earn. They believe the foundation of their enterprise is a robust community that is earning.

Momento’s goal is simple – Feature two types of NFTs: one that depicts the most memorable moments of the last decade, and the other that focuses solely on the most well-known crypto projects, showing key moments from their crypto journey in a single piece of art.

These NFTs are created to evoke a sense of nostalgia in collectors, allowing them to participate in something that will last forever.

Have you heard about PancakeSwap NFT Marketplace? Well, CactiClub is one of the first third-party art collectibles with actual use cases to be potentially listed on the market. Considering that PancakeSquad, a collection launched by the PancakeSwap team, had a floor of 8 BNB and set foot on 60,000 BNB volume, we can expect nothing but good news along with the incoming listing.

CactiClub is a collection of 6499 randomly generated 3D cacti that first appeared on the BSC blockchain. With a floor price of 0.4BNB, the value of each Cacti will potentially make ATH once it’s officially available on PancakeSwap Market. The pieces were handcrafted by a recognized digital artist who likes to maintain a mysterious sense of anonymity under the name of Peyote Pal, “The Animator.” Each Cacti’s rarity boosts its in-game power.

Once you buy their NFT, a sequence of unique Cacti created by the blockchain is minted and transferred to your wallet. When collectors buy Cacti, they immediately gain admission to a fantastic community! They automatically receive a rare piece of art, access to a P2E wager game and even the option to stake your NFT to earn a CACTI token!

Bullseum is an NFT art project that can be purchased on OpenSea, and has 5,000 collectible NFTs with over 110 qualities.

The “most significant art collection of this civilization” is housed in the “Bullseum,” a museum that houses pictures of the most influential Bull species. These portraits were created by some of the most innovative people on the planet.

The initial sale price for each bull was 0.07ETH, and they reached a peak floor of 0.3ETH. Bullseum also has 20 ETH set aside for the development of a video game in the future.

The marketplace is an integral part of the AtomicAssets hub! Traders can easily access the platform to dive deep and uncover more gems in the space.

There is also a function to trade offer feature: when an asset is put up for sale, the marketplace receives the trade offer and will be only accepted if the buyer purchases the asset.

The marketplace is intended to be completely self-contained from its parent network. The 2% charge received from each transaction goes to whichever marketplace makes the listing and purchase of the sale possible.

To sum up, these are some of the hidden gems in the world of NFTs, be it a marketplace or an NFT collection. Each one of them has something incredible to offer!

It’s intriguing how this space has grown exponentially, and it’s only going upwards from here! What do you think about these gems?