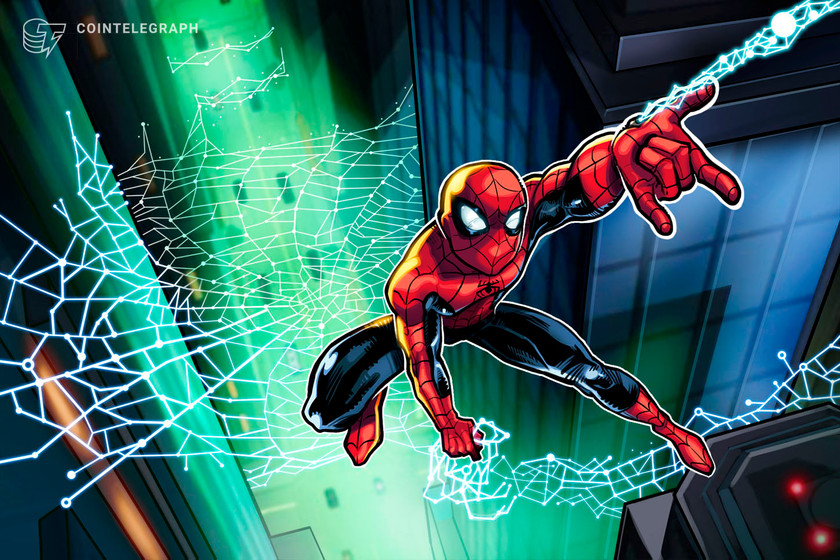 AMC Theatres is planning a nonfungible token (NFT) promotion to celebrate the opening day of Sony Pictures’ Spider-Man: No Way Home at cinemas across the United States.

The company is offering a limited number of up to 86,000 Spider-Man NFTs for members of its “AMC Stubs Premiere & A-List” and “AMC Investor Connect” subscriptions. Those who purchase an advance ticket for the Dec. 16 showing of the latest Spider-Man movie will be eligible for the airdrop.

The collaboration between Sony Pictures and AMC Entertainment is the first of its kind, according to the Sunday announcement.

More than 100 NFT designs will be available created by Cub Studios, a BAFTA award-winning animation studio. The tokens will be redeemable on the WAX platform, a carbon-neutral blockchain running on proof-of-stake consensus.

The hotly anticipated movie is the third in the Spider-Man Hero franchise and the sequel to Spider-Man: Far From Home, which grossed $1.13 billion globally.

Renowned British NFT artist Damien Hirst has airdropped 10,000 NFTs to those who have previously purchased artwork from his “The Currency” collection.

The giveaway is from the new NFT collection “Great Expectations,” which is a series that contains 10,000 images based on his Certified Lover Boy artwork.

(1/10) Everything done well is art. With Drake’s support and blessing, I’ve created this free Thanksgiving gift for all currency NFT holders; it’s loosely based on the album cover I made for Drake. pic.twitter.com/IlB0EjpGrg

The collection is based on the artwork for the cover of “Certified Lover Boy,” the sixth studio album by Canadian rapper Drake. On Friday, Hirst commented:

“I tried to create an image that sums up the powerful hope filled love, humor & daring truth in the music of Drake for his album cover and now my hope is that with this free gift you can all share and feel the excitement I feel about NFTS and the digital world.”

The platform includes a 3D voxel engine and a pixel engine, which allows users to create 3D models that can be converted into NFTs and used in video games.

Lukas Merville, founder and team lead at NFT Studio, said that 3D creators are often limited on networks, such as Ethereum or Solana, that cannot handle large files sizes, before adding “3D NFTs sounded like fiction — well beyond the current state of blockchain technology. But we have made them possible on-chain thanks to the Internet Computer.”

There are a number of NFT collections already running on the ICP, such as ICPunks, ICPuppies and ICKitties.

A rare plot of digital land in the Axie Infinity game sold for 550 ETH, or roughly $2.5 million, on Thursday. There are just 220 “Genesis plots” in existence, making them among the rarest in the game.

Axie is not the only notable virtual land sale as some plots have been fetching big bucks recently. As reported by Cointelegraph, the Decentraland-based Metaverse Group purchased 116 parcels of land in a prime location in the metaverse for 618,000 MANA tokens, worth roughly $2.5 million.